“Eros Day celebrates an ancient god, a phallic planetoid and the power of love and lust in our lives.  It’s time to Make Eros Not Thanatos…Stop the Killing, Start the Party!” says Dr. Block. 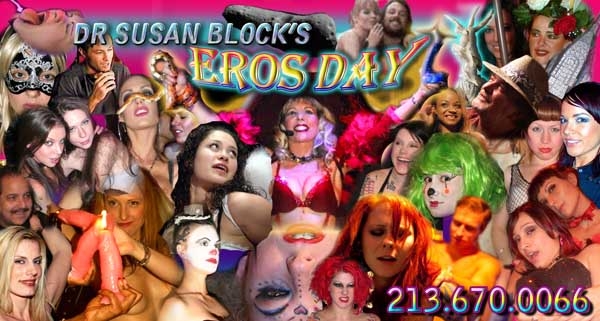 Tonight’s live broadcast of The Dr. Susan Block Show celebrates the 14th annual EROS DAY, when the penis-shaped, boulder-balled planetoid 433-EROS spins closest to Earth, as we look up toward the heavens and follow our classical Greco-Roman ancestors in honoring EROS, the powerful trickster god of love, lust and life itself.

Joining Dr. Block in her Womb Room broadcast studios will be real-life couple Lord Exceter Miles and Fey Adene who will embody the divine couple, EROS and VENUS, performing a special Commedia Erotica Story of Eros & Venus that has been acted out in various forms every year on Eros Day in Bonoboville since the year 2000.

Watch the LIVE BROADCAST & See All the Pix and Past Shows at http://drsusanblock.com/TV.html

To join our exclusive live in-studio audience and the after-party at Dr. Suzy’s Speakeasy in the Soul of Downtown LA, aka BonoboVille, call or go to http://tinyurl.com/DrSuzyRSVP

The Dr. Susan Block Show beverages of choice are Absinthe and Hennessy, among the many fine libations and gourmet hors d’oeuvres featured at the always-popular Speakeasy Open Bar and Aphrodisiac Buffet.  Sex toys provided by Sybian, CalExotics, ScreamingO, Divine Interventions, Stockroom, JuxLeather, Pipedream Products and Condomania condoms. Proceeds from donations go to help save the highly endangered “make love not war” bonobos from extinction in the Congo and to promote the Bonobo Way of Peace through Pleasure around the world.