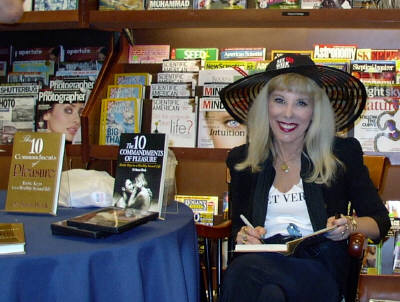 Best-known from her #1 Nielsen-rated HBO specials, Radio Sex TV with Dr. Susan Block, as well as her popular, often rerun episodes of the classic HBO series Real Sex and Cathouse, which have made her a familiar face on HBO’s late-night programming, Dr. Suzy has made numerous guest appearances on many other radio and TV shows, including The Doctors, Oprah, MTV, Nightline, Today, NY Post Video, MEL and many more.  For over 30 years, she has hosted The Dr. Susan Block Show, called the “Best of LA’s Phone-In Shows” by The LA Weekly,  “boldly original” by Libido Magazine and “the greatest sexuality show on earth” by the Brentwood Bla Bla. Talking about all aspects of sex, relationships, politics and culture, she interviews a wide variety of guests, from professors to porn stars, authors to icons, broadcasting live every Saturday night from her “Womb Room” studio in “Bonoboville” (both a real place in LA and a social media site).

One of the top contributors to the Wiley-Blackwell International Encyclopedia of Human Sexuality, Dr. Block has written definitive articles on cuckolding, fetish, spanking, phone sex and striptease. She also wrote the foreword for the acclaimed collection, Ecosexuality: When Nature Inspires the Arts of Love. Her first book,  Advertising for Love (Morrow), a popularization of her master’s thesis, forecast the current online dating explosion. Her second book, Being a Woman (Random House) which she co-wrote with pioneer radio psychologist Dr. Toni Grant, was a New York Times bestseller. Her third book, The 10 Commandments of Pleasure (St. Martin’s), has been published in 15 countries and is now in its third English-language printing. She is quoted in The Bonobo & the Atheist by Dr. Frans de Waal,  and she is a contributor to to The Live Art Almanac Volume 4 for her Eulogy for Frank Moore, Serpents in the Garden: Liaisons with Culture and Sex, an anthology by Counterpunch. Dr. Suzy is also frequently quoted in Cosmopolitan, Salon, The NY Post, Alternet and many other publications. Her columns on sex, health, politics and culture are published in various print and online magazines from Counterpunch to Mind Body Green (as well as appearing in her own online Journal), and are touted as “among the most readable to come out of LA” by Steve Mikulan in The LA Weekly.

A fascinating speaker on multiple subjects related to sexuality, Dr. Block has addressed a variety of groups from YPO (Young Presidents’ Organization) to LSO (Lifestyles Organization) on sex, love, peace, pleasure, relationships, fetishes, fantasies, culture, politics, female empowerment, male well-being and the Bonobo Way. Her Bonobo Way talks and presentations at universities and conventions are especially legendary. In 2016, at the University of Puerto Rico, Mayagüez, she delivered the keynote address to the world’s first Ecosexuality Symposium at an academic institution. At UC Berkeley, she presented “The Bonobo Way of Nonmonogamy” at the 5th Conference on Monogamy & Nonmonogamy, and she gave a talk on  “The Bonobo Way of Inclusivity” at AASECT, the American Association of Sex Educators, Counselors & Therapists. and was invited back to give another talk at AASECT 2019 in Philadelphia. She presented “The Bonobo Way of FemDom Power” at DomCon LA 2016; and was invited back as a “Guest of Honor” to deliver “FemDoms of the Wild: Bonobo Female Empowerment” at DomCon 2017, the FemDom Bonobo Way at DomCon 2018 and DomCon 2019. At Adultcon, she presented “The Bonobo Way of Great Sex”. Dr. Block has also given lectures in Human Sexuality at USC, UCLA & Caltech, as well as at her alma mater Yale University for Sex Week at Yale and many other events.  In August 2020, besides reprising her popular Bonobo Way presentation, Dr. Block will serve as Dom Con 2020 Mistress of Ceremonies. 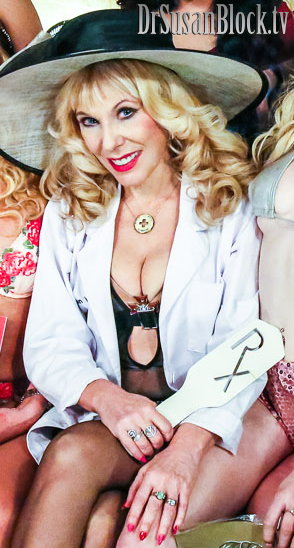 “Dr. Block is one of the nation’s leading sexologists, and a very bright and funny woman to boot,” writes Robert Scheer in The LA Times.

Penthouse calls her a “genius when it comes to sexual matters.”

A professional member of the American Association of Sexuality Educators, Counselors and Therapists (AASECT) and the Society for the Scientific Study of Sexuality (SSSS), Dr. Block utilizes both conventional and unorthodox methods of therapy in her practice. Every client is different, though she most often takes a three-pronged approach to treatment, involving 1) analysis, 2) technique and 3) adventure. Based upon her work with clients, guests, artists, staff and others over the past two decades, Dr. Block has developed the “erotic theater therapy” system, practiced both in her brick and mortar studio and via the telephone, webcam and other private communications media. From her West LA campus, she and her staff of therapists, artists and technologists produce sex-educational and entertainment media and provide therapy to an international clientele from nearly every country on the planet.

“Dr. Suzy is no ordinary doc,” writes Dr. Carol Queen in Spectator. “I was struck by the combination of cool aplomb and sexy compassion with which she handles her callers… Unlike the great majority of degreed professionals who know something about sex, she refuses to de-eroticize herself to get respect. She refuses to follow in the footsteps of the likes of the unfuckable Dr. Ruth, and this may not get her invited to some conferences, but she knows where her real respect comes from – her listeners and viewers, many of whom call her over and over and whose stories, problems and sexual fantasies she knows so well.”

Chosen as one of “America’s Greatest Thinkers” (twice) by the Great American Think-Off, praised for her “prescient financial advice” by the Wall Street Journal, dubbed “the Erin Brockovich of the Bonobo” by Salon and “an ecosexual visionary” by Dr. Annie Sprinkle, Dr. Block has been an impassioned advocate of the highly endangered bonobo chimpanzees for over 25 years, using their very sexual, non-violent and gender-egalitarian “lifestyle” as inspiration for her pre-Bonobo Way philosophy of “ethical hedonism.” Her system of “Bonobo Liberation Therapy,” her educational Block Bonobo Foundation, her Bonoboville community, and her acclaimed manifesto The Bonobo Way are pillars of revolutionary advocacy.

“Dr. Susan Block is America’s hottest sex therapist,” writes Jan Birks in Forum, “dispensing wisdom from her boudoir and taking the bonobo chimps as her model for the perfect sexual philosophy.”

Her sex educational film series Dr. Suzy’s Squirt Salons, instructional videos and clips bringing the mysteries of female ejaculation into the grateful grasp of thousands, was featured in the Cinekink and Barcelona Erotic Film Festivals, and her music video Blonde Island: Funk Me was in the LA Erotica Film Festival as well as Cinekink. She is currently co-producing Speakeasy, a documentary about her institute, with award-winning filmmaker Canaan Brumley (Ears Open, Eyeballs Click), San Diego Filmmaker of the Year and First Prize winner at the Marseille Film Festival. Dr. Block is also a member of the Academy of Television Arts & Sciences (documentary division), The LA Press Club and the Society of Professional Journalists, Los Angeles.

She has also lent her expert knowledge of the human sexual condition to community service and the cause of justice, having served as a consultant to the LA Public Defenders Office (Sex Crimes Division) and private attorneys.

But she’ll never quit her day job as a sex therapist in private practice, serving clients all over the globe, from Southern California to Saudi Arabia.

And don’t worry, when you call her for telephone sex therapy, you are not on her show! Nor are you being recorded in any way (unless you specifically request that). Though Dr. Block herself is a public “personality,” she understands the importance of maintaining the utmost privacy for her clients, and has an impeccable 25-year record to prove that. Everything in your sex therapy sessions is private, discreet and absolutely confidential.

As a private client, you will receive Dr. Block’s total undivided attention, and you can talk with her or one of her other therapists about absolutely anything. For some topic ideas, see What Can We Talk About? 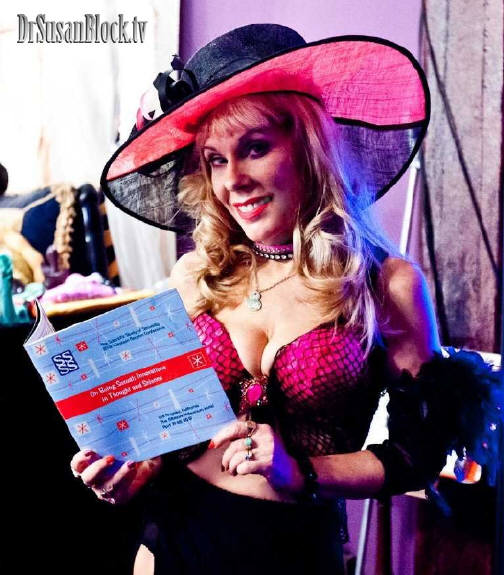