This Saturday, March 15, 2014, The Dr. Susan Block Show, broadcasting live from Bonoboville at LAX, will celebrate the Irish/Jewish convergence of Purim AND St. Patrick’s Day in one lucky show!

International sexologist Dr. Susan Block will deliver a condensed version of her annual Purimspiel on the Biblical Story of Esther, the ancient heroine who averts a genocide armed with nothing but her Weapons of Mass Seduction, AND investigate the story of St. Patrick, a British prince kidnapped by Irish pirates who goes on to become the patron saint of Ireland. 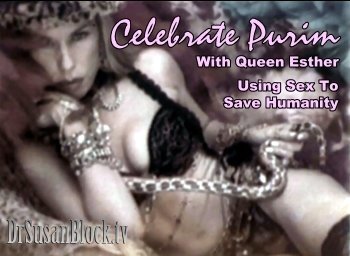 Dr. Block’s special guest will be ex-Orthodox Jewish leprechaun and critically acclaimed indie actor, Luzer Twersky. Other special guests TBA. Purim traditions of donning masks and cranking groggers
and St. Patty’s traditions of wearing green and kissing-everyone-because-we’re-Irish will be observed. At the center of each holiday is a triangle.  Purim celebrants eat hamentaschen which we also call “pussy cookies” on DrSuzy.Tv, since they are shaped like an open vulva, complete with a jam-filled hole in the middle (this seems more interesting than the more conventional explanation that their triangular form comes from the villain Haman’s hat). The shamrock of Saint Patty is also a triangle, its three-leaves purportedly representing the “Father, Son & Holy Ghost.”  Besides triangular fetish objects, both holidays revolve around luck, lotteries, games of chance and the lusty, playful coming of Spring.

And then there’s the drinking.  Both Purim and St. Patrick’s Day are great feasts of alcoholic excess. On Purim, often called “the Jewish Mardi Gras,” one is “commanded” to drink “until one cannot tell the difference between the hero and the villain” (Babylonian Talmud, Megillah 7b). The St. Patrick’s Day practice of imbibing green cocktails and large quantities of Guinness goes back to the old saint himself who is said to have liked “the hard stuff” and not only converted the pagan Irish to Christianity, but converted a stingy innkeeper into a generous one who filled his patrons’ cups to overflowing.

The Megillah (“Scroll of Esther”) features enough alcohol to float Noah’s ark, every important scene including wine (they didn’t have Guinness in ancient Persia), beginning with a 180-day Dionysian-style festival of Biblical proportions (and we think we overdo it when we just party all weekend). Alcohol being one of the few genuine aphrodisiacs known to man and womankind, St. Patty’s and Purim are two of the likeliest holidays to “get lucky,” in their respective traditions. So drink up, cheers, l’chaim and sláinte ! But please do NOT imbibe and drive.

Want to join us in New Bonoboville LAX for Purim & St. Patty’s IN-PERSON? Members may inquire about being part of a small audience for this Saturday’s show and after-party/dinner by calling 626-461-5950.