This Saturday night, September 17th, The Dr. Susan Block Show will examine California Proposition 60, on the ballot November 8, which targets adult industry performers, requiring them to wear condoms and other latex barriers (including goggles!) on all film shoots, and incentivizing California residents to sue adult performers and producers for not complying with the proposition. Joining international sexologist and Bonobo Way author Dr. Susan Block live in-studio will be multi-award-winning adult superstar Julia Ann, leading the fight against Prop 60, as well as Free Speech Coalition (FSC) activist adult performer, “The Whore Next Door” columnist for the SF Weekly and Truth, Justice and the American Whore author Siouxsie Q James.

“During this divisive election season, it’s difficult to get Republicans, Democrats, and Independents to agree on anything, but Prop 60 is so poorly drafted that (it) is the only measure on the November ballot with tri-partisan opposition,” states the FSC. “Julia Ann joins the California Democratic Party, the California Republican Party, the California Libertarian Party, Equality California, The Transgender Law Center, the Los Angeles LGBT Center, AIDS Project Los Angeles, San Francisco AIDS Foundation, San Francisco Medical Society, the Friends Committee on National Legislation, the Adult Performer Advocacy Committee, Free Speech Coalition and a growing list of organizations that oppose Proposition 60.”

Julia Ann’s political activism comes on the heels of being “frustrated with the AHF [AIDS Healthcare Foundation, the sole proponents of the initiative] Prop 60 commercials and it was so bothersome to know that we just can’t compete with that type of campaign since we don’t have the financial means,” she explains. “However, the Adult Industry has cultivated an extreme social media presence and I thought a grassroots effort could shed light onto what is really happening for us and how we truly feel. So, I sat down with the No On 60 buttons [designed by Isabel Dresler] that were already created and formed social media templates so we could educate voters and raise awareness about on our opposition.”

One Weapon of Mass Discussion on sure-to-be sapiosexually stimulating show will be: ARE YOU NEXT? If Prop 60 passes, will its supporters then demand that you and your friends wear condoms and other latex barriers when engaging certain kinds of sex that they deem dangerous? What if you film yourself and your honey making love? 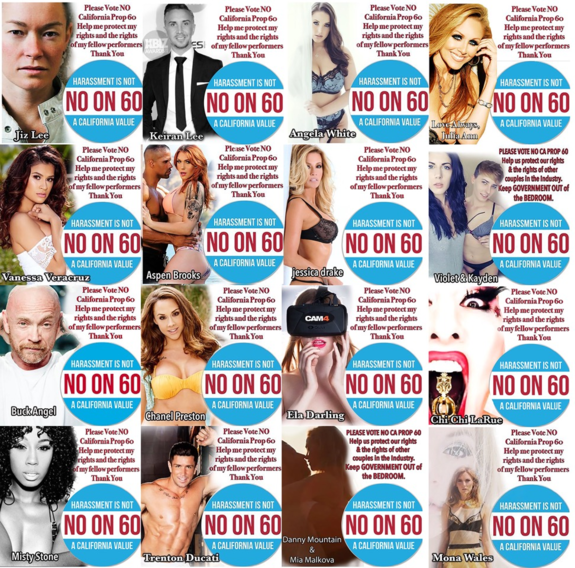 Click Here to RSVP to attend this show in the “Speakeasy” studio audience and share pleasures under the palms of Bonoboville this Saturday, or call 626.461.5950 (you can call anytime; someone is always here). Studio doors open at 9:30 pm. Studio Members FREE. Membership Has Its Pleasures.

“No Prop 60″ will broadcast LiVE from Bonoboville on The Dr. Susan Block Show Saturday night, September 17th, 2016, 10:30pm-Midnight PST. It can be viewed on DrSuzy.Tv or in Bonoboville where you can also chat live in the Bonoboville Studio. This show and all past shows can be viewed in archives on DrSuzy.Tv and can be heard free on DrSusanBlock.com.

GIVE THE BONOBO WAY!

Make 2016 your Year of the Bonobo and get your copy of The Bonobo Way: The Evolution of Peace through Pleasure. Already got one? Give it to someone you love.